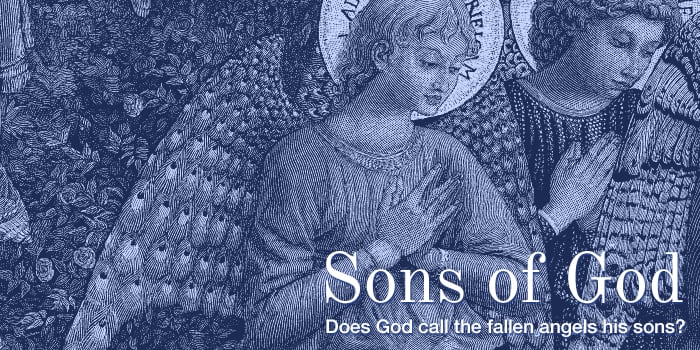 Sons of God, are they angels?

Sons of God in Genesis 6, are they angels or Godly human men (sethite view)?

And it came to pass, when men began to multiply on the face of the earth, and daughters were born unto them, That the sons of God saw the daughters of men that they were fair; and they took them wives of all which they chose. And the Lord said, My spirit shall not always strive with man, for that he also is flesh: yet his days shall be an hundred and twenty years. – Genesis 6

Before I begin proving that the sons of God are in fact angels and not humans as so commonly believed by most Christians. I ask you, where in the Bible does God say the following;

The book of Job was the very first book written in the Bible, so let’s see what Job says about angels; Whereupon are the foundations thereof fastened? or who laid the corner stone thereof; When the morning stars sang together, and all the sons of God shouted for joy? – Job 38:6-7

Here God is telling Job how He created the earth and laid it’s foundations, which means angels were most likely created during the creation of Heaven. We see in Genesis 1 God creates Heaven first and then the earth. In the beginning God created the heaven and the earth. – Genesis 1

Angels had to be created before Adam, that much nobody can deny and if the morning stars and the sons of God shouted for joy when God had finished creating the earth, but Adam was not yet created, then it is safe to assume the Bible calls the angels sons of God. But let’s keep going further.

Now there was a day when the sons of God came to present themselves before the LORD, and Satan came also among them. – Job 1:6

Men do not present themselves before God with Satan. Only fallen angels do. A lot of people go to Hebrews which says; For unto which of the angels said he at any time, Thou art my Son, this day have I begotten thee? And again, I will be to him a Father, and he shall be to me a Son? and tell me ‘see God never calls angels His sons.’ These people are willingly ignoring two very important things. First of all, this verse applies to humans too. Notice the word begotten there. God has not begotten anyone but Jesus Christ. So if you replace the word angels with man, it would be accurate.

Secondly, the context is important. Reading the Bible out of context is foolishness, you can make it say anything and a lot of unsaved people do that when it comes to the gospel, concerning repentance, works, fruit, etc. But let’s see what Hebrews 1 says in context of God not calling any angels His begotten sons;

God, who at sundry times and in divers manners spake in time past unto the fathers by the prophets, Hath in these last days spoken unto us by his Son, whom he hath appointed heir of all things, by whom also he made the worlds; Who being the brightness of his glory, and the express image of his person, and upholding all things by the word of his power, when he had by himself purged our sins, sat down on the right hand of the Majesty on high; Being made so much better than the angels, as he hath by inheritance obtained a more excellent name than they.  For unto which of the angels said he at any time, Thou art my Son, this day have I begotten thee? And again, I will be to him a Father, and he shall be to me a Son?

Is it starting to make sense? God is telling them Jesus Christ is God, He tells them Jesus Christ is the Word, who created all things and without Him was nothing created and as powerful as an angel is, he is nothing compared to Jesus for He is God. The whole book of Hebrews is about saved Christians who were tempted to go back to Judaism to offer animal sacrifices again and Paul writes this letter to them saying they do not need to do so because Jesus is the ultimate sacrifice, He died on the cross, He was the lamb slain for all our sins and going back to Judaism to slay sheep is saying Jesus’ sacrifice was not enough, He was not God and He did not save anyone. This is the context of the book of Hebrews and now it should be clear to you why God says in Hebrews 1 that angels are not the begotten sons of God.

I know someone out there won’t do their research and tell me in the comments that I am wrong because begotten means this or that. First we will compare scripture to scripture, the Word for begotten is monogenēs Strong’s 63439 when it comes to Jesus and it is used in Luke as well, let’s have a look.

And the Word was made flesh, and dwelt among us, (and we beheld his glory, the glory as of the only begotten G3439 of the Father,) full of grace and truth. – John 1:14

So what does monogenēs mean? It’s defined in two different ways, the first means “pertaining to being the only one of its kind within a specific relationship.” and the second definition is “pertaining to being the only one of its kind or class, unique in kind.” Which one do you think applies where? We know from scripture there is only one God and this one God is three different persons. This is absolute proof that Jesus Christ is unique, one, God and it proves that the angels are not called the begotten sons of God because of that same reason. Because they are not one, they are not unique and they were created, birthed, formed.

Sons of God are angels

If we go back to Genesis 6 it says the following; And the Lord said, My spirit shall not always strive with man, for that he also is flesh: yet his days shall be an hundred and twenty years. Why would God write also there? Could it not be that the angels who sinned in Genesis 6 became flesh? We know from scripture angels can look like humans, eat food, in Sodom and Gomorrah the people there wanted to rape the angels and in turn the angels blinded them. When they become flesh, they look like men, there are no female angels spoken of in the Bible and if they become men and can eat and drink and look like men, it is logical to conclude they have all the parts a normal male has.

In Jude 1:6 it becomes painfully obvious and it reads; And the angels which kept not their first estate, but left their own habitation, he hath reserved in everlasting chains under darkness unto the judgment of the great day. Why did God only punish a few certain angels? It is pretty obvious Satan is walking about this earth, deceiving it, it is also obvious he drew a third of the angels with him in the fall, if the punishment was being chained up as it says in Jude, then why is Satan not chained up? It would be very unjust to chain up all the angels for falling but leave Satan to roam this earth. No, the angels being chained up are the same angels spoken of in the book of Enoch. Now, I know that is not scripture and I do not tell you to read it the way it is scripture, but it sure has a lot of things it expounds upon without contradicting the Bible, not only that, the book of Enoch is clear to tell us that it’s for a remote generation to come who will be in the last days, and we are certainly in the last days.

God bless you, I hope you enjoyed this study, Amen.